BACHELOR GIRL was born in 1992, when songwriter James Roche heard the then 18-year-old Doko singing in a Melbourne pub. His pint was soon forgotten and he invited her to sing vocals on a track he was laying down. The song-writing chemistry between them was explosive and they formed the BACHELOR GIRL duo pretty much immediately. Their double platinum selling debut, “Waiting For The Day”, won them the 1998 ARIA for Best Producer.
James also won the Song Of The Year award as writer of the hit single “Buses And Trains”.
Releases followed throughout Europe and Asia, and the band were pursued and signed by the legendary Clive Davis at Arista Records in the USA.
A second album, Dysfunctional, followed in 2002. 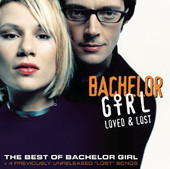 2011 - A greatest hits and "lost tracks" -
the best of Bachelor Girl and previously unreleased gems.